Beyond Limits at VentureBeat Transform 2019

Beyond Limits CEO, AJ Abdallat will join a group of esteemed AI thought leaders in less than 3 weeks when he sits down with Venture Beat founder, Matt Marshall to discuss how Beyond Limits is accelerating business with AI.
In his keynote, AJ reflects on his journey, from being a kid enthralled by the moon landing, to working with Caltech the Jet Propulsion Laboratory applying NASA space technology for industries on earth, to growing Beyond Limits as CEO starting in 2014. AJ reflects on the date of June 20, 1969, the day the first man landed on the moon. This year marks the 50th anniversary of the moon landing and AJ remarks how monumental and significant this anniversary is to Beyond Limits. 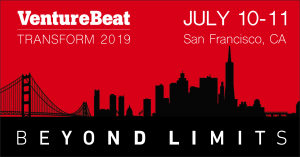 AJ was only 8 years old, living in Amman, Jordan when Apollo 11 landed on the Moon with Commander Neil Armstrong and Lunar Module Pilot Buzz Aldrin. AJ sat in his home watching these remarkable astronauts take the first steps on the moon, 238,900 miles from earth and was immediately inspired. When AJ thinks back to this moment, he comments, “Little did I know that one day I would be working with Caltech and NASA, the same agency that put these men on the moon.”

Inspired to become an engineer, AJ graduated from UC Berkeley and eventually begin working with Dr. David Baltimore, Caltech President to bring space technology to earth. The first space technology that AJ brought to earth was the tunable diode laser, designed to detect water on Mars. He found a market for it the LNG industry.  Today, at Beyond Limits, AJ is bringing advanced technology used in the Voyager II and Mars Rover missions to solve problems on earth. AJ, along with Beyond Limits CTO Mark James are leading their teams to develop cognitive AI that can be used to accelerate business in Energy, Manufacturing, and Healthcare industries.

During AJ’s keynote and fireside chat with VentureBeat, he will discuss how Beyond Limits AI solutions that were developed for space are now being applied on earth. He will explain how AI technology works for industry and what problems can be solved with AI. And he will touch on key issues for AI, like earning trust on the path to autonomy, and the importance of explainability so AI systems can explain their reasoning to the people in the decision-making loop. Don’t miss AJ onstage at VentureBeat Transform on July 10-11 in San Francisco, CA.