AI for the enterprise transmitted directly from Mars

For marketing intelligence to explore new frontiers and achieve its ultimate goal, chief marketing officers may find their CRM applications were once developed by NASA and tested in space.

Those indomitable words intoned by Neil Armstrong, “That’s one small step for a man, one giant leap for mankind,” when he set foot on the moon in July 1969 poignantly signaled a new era in the history of civilization. For card-carrying members of the baby boomer generation who huddled around their family TVs and watched in real time the images of two ghost-like humans kicking up dust on the lunar surface, that seminal moment inspired midsummer night’s dreams of one day becoming an astronaut.
As an 8 year old living in Amman, Jordan, and watching that historic moonwalk, AJ Abdallat had high hopes of becoming an engineer, not knowing then how closely intertwined his childhood ambitions would eventually be with NASA and the space program. Fast-forwarding nearly 50 years, “I’m an engineer by training and an entrepreneur,” Abdallat proclaimed. “I have a passion for technology and taking technology to the commercial space. I’m going to look for real pain in the market and then try to solve those kinds of problems.”

Abdallat’s career has been largely devoted to creating AI for the enterprise by adapting and optimizing artificial intelligence projects and inventions spawned by NASA’s Jet Propulsion Laboratory (JPL) and its founder, the California Institute of Technology (Caltech). For the past 20 years, Abdallat has collaborated with Caltech/JPL on commercializing smart sensors and AI applications. His latest venture as CEO of 4-year-old startup Beyond Limits continues his close and symbiotic relationship with R&D dedicated to the space program.
Applications developed by Caltech/JPL have a distinct advantage: Their software and devices have been tested and proven to withstand the harsh and unforgiving environments encountered during robotic explorations of the solar system. Under the Bayh-Dole Act of 1980, universities, nonprofit research institutions and small businesses are permitted to own, patent and commercialize inventions or intellectual property developed under federally funded research programs within their organizations.
Over the course of six decades, NASA’s joint research and development for its space missions has yielded a wide range of well-documented, everyday commercial products to which it can lay at least partial claim, including LEDs, prosthetic limbs, scratch-resistant sunglasses, enriched baby food, fireproof pajamas and a technology near and dear to Abdallat, the tunable diode laser. 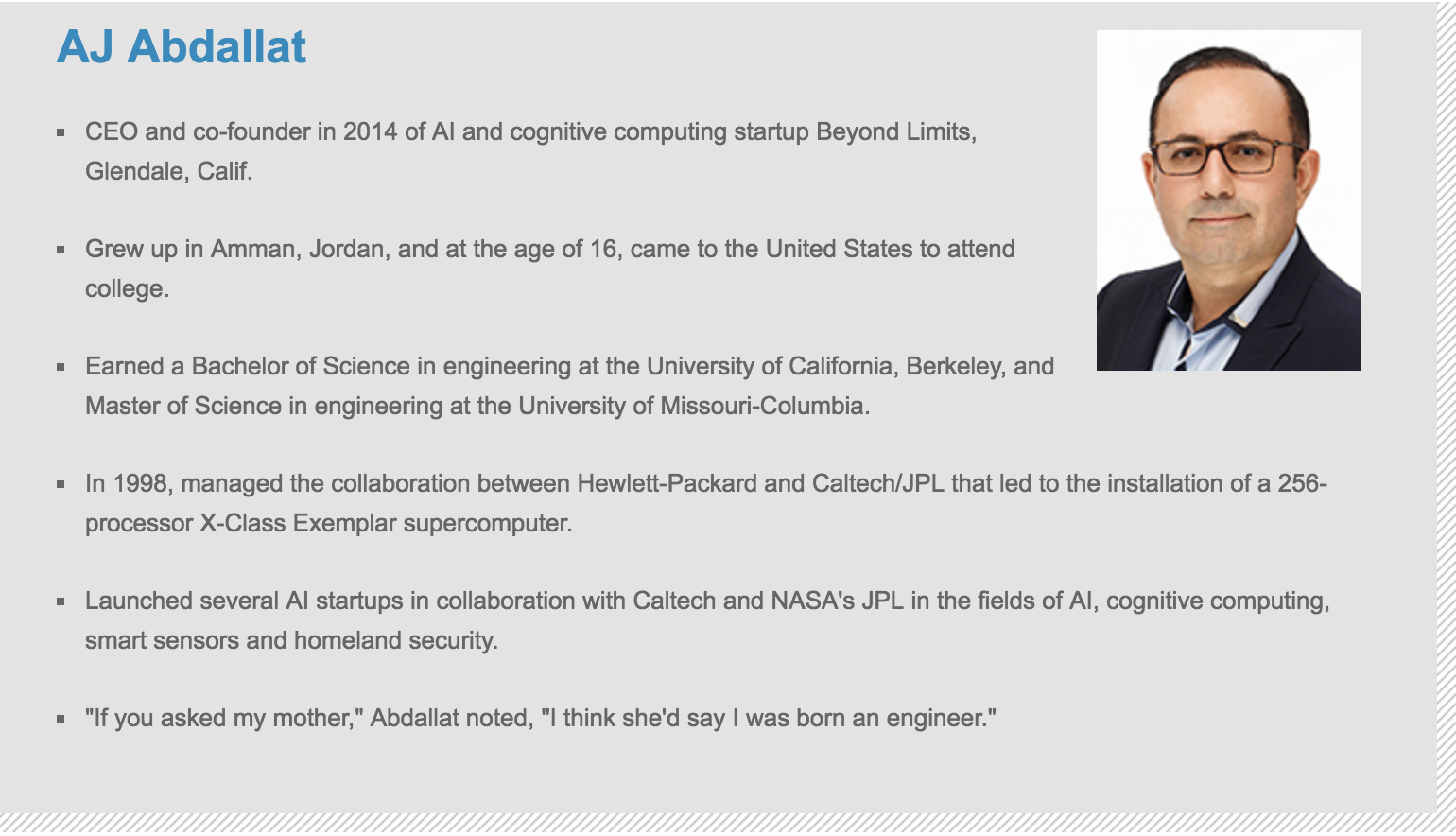 “JPL has a unique mandate,” Abdallat said. “Their focus is on the unmanned space program. It’s relevant because JPL and Caltech are trying to create autonomous operations where human beings cannot be present. So, in the absence of basically having human beings present, you need to create human-like reasoning to support these missions.”
Mars land rover missions over the past 15 years have involved testing the Martian soil for evidence of water and therefore signs of life. JPL developed the tunable diode laser for that purpose, Abdallat said, and “we applied it to the natural gas industry where the biggest contaminant is water vapor. [W]hen it exceeds certain levels, [water vapor] can create a dangerous environment where utility companies have to shut down pipelines — a very expensive, costly option. So that was one of the successful projects where we took a technology that was built for Mars, and we applied it for a real application here on earth.” 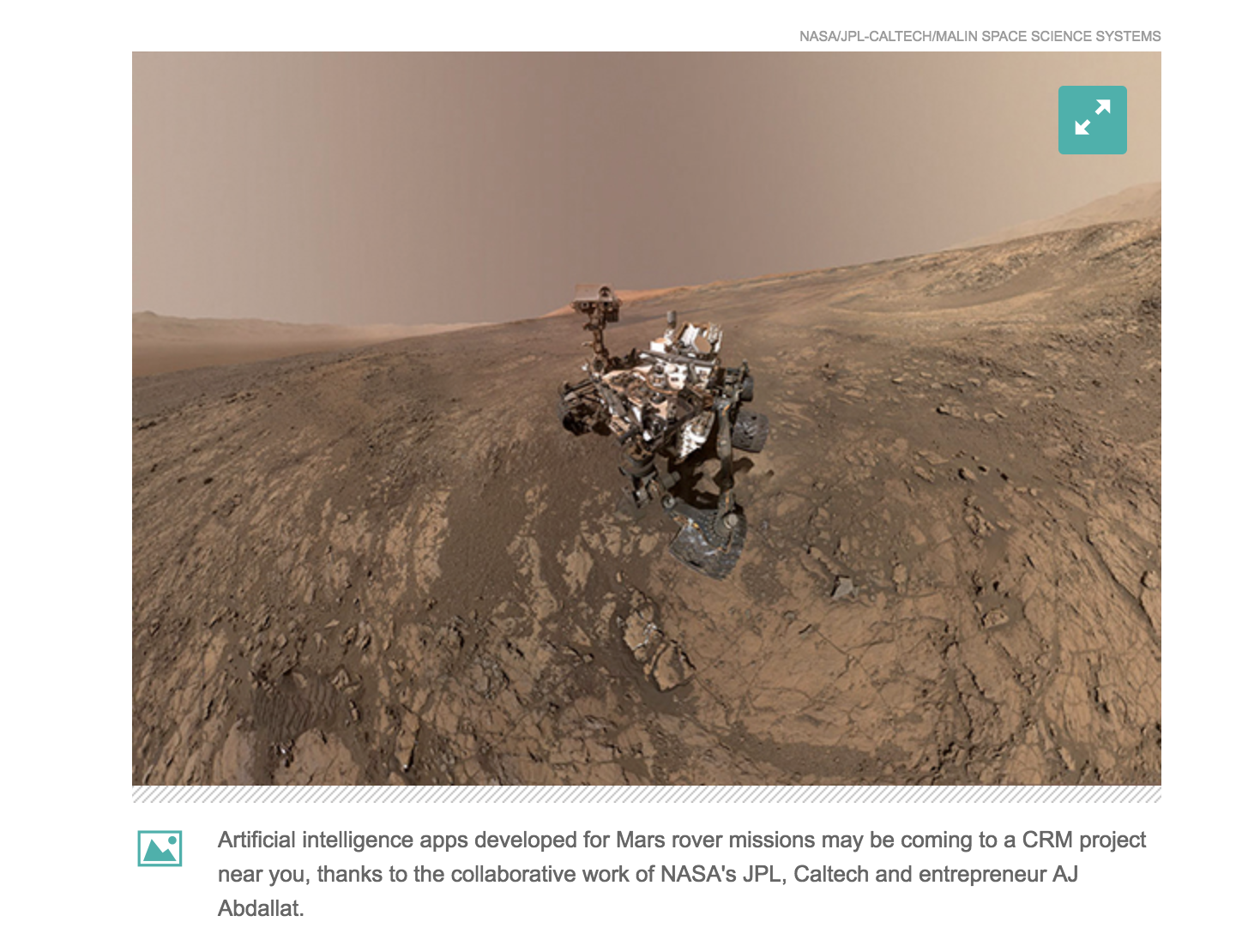 AI is a two-sided coin

In addition to heavy industrial applications, Abdallat is now setting his sights on applying AI for the enterprise to customer engagement strategies, especially in financial services. “Location, retail behavior, investment history, saving patterns, spending patterns, all converge to help forward-looking [chief marketing officers] match individual customers with individualized products and services,” his company’s literature reads. “The goal of an AI-driven offering is to reach the customer just before they need it, not after they’ve left the premises.”
In the era of big data, internet of things, social media, multiple communication channels and AI for the enterprise, “we take both the numeric and symbolic approach to solving common problems,” Abdallat reasoned. That involves sensor fusion, he added, to sift through large pools of unstructured data as well as situational awareness to assess the data and derive actionable intelligence in strategic marketing, sales and business planning.
This concept of cognitive computing and human-like reasoning has propelled Abdallat to take a giant leap beyond the limits of “conventional AI” to help solve complex problems and engage customers. “Machine learning or neural networks is what we call the numeric side of AI,” he explained. “The human brain is really not good at doing large calculations; a calculator can do that faster. But what we’re good at is that symbolic side. That’s where we are superior to machines. Beyond Limits takes the outputs from these numeric tools — machine learning, deep learning, neural nets — and we make actionable intelligence when the presence of human beings is not possible or when you want to automate that layer.”

Finding actionable insights by analyzing human behavior and ensuring that the data is credibleare key ingredients in formulating sound AI for the enterprise marketing intelligence and CRM programs. “[W]hen you’re operating in space,” Abdallat conjectured, “you’re operating in a dynamic environment. You’re not going to have all the rules, you may have missing rules or you may have missing or misleading information. Unfortunately, in the neural net world, if you have missing data, it’s going to stop [working]. Or if you’re going to tweak that information, you’re going to have to start all over again. You need that human-reasoning layer to basically take those labels, features and make actionable intelligence.”
Outer-space robotic exploration is taking on new life. NASA’s Interior Exploration using Seismic Investigations, Geodesy and Heat Transport, or InSight, spacecraft is now one month into an approximately seven-month journey to the Martian surface and a subsequent two-year study of the red planet’s environment, interior, evolution and potential for human habitability. Only time will tell what resultant AI applications might be adapted for the enterprise and eventually find their way into future CRM programs.
Before giving the stamp of approval to an AI project in space exploration, NASA “wanted an audit trail, [and] they wanted an explanation of how you got your answer,” Abdallat acknowledged. “If you could not show NASA how you got the answer and provide an audit trail, it was not acceptable. So that’s what symbolic AI brings to the table.” He noted that Beyond Limits CTO Mark James, senior AI scientist at JPL, developed the building block technology from the ground up to provide an explanation and an audit trail that was “very important to NASA.”
Abdallat estimated that his company currently has about 45 intellectual property building blocks, “25% of which are licensed from CalTech, 25% inherent IP or derivative IP; the remaining 50% is brand new IP that we developed and created here at Beyond Limits.”
All of which might seem like light years since the first moonwalk a half century ago and the event that advanced Abdallat’s childhood desire to be an engineer.