Beyond Limits: A Pioneer in Advanced Artificial Intelligence and Cognitive Solutions

Beyond Limits is an advanced artificial intelligence (AI) company founded in 2014. The company applies pioneering inventions with proven technologies from the NASA space program to solve complex mission-critical problems. Beyond Limits is proud to have a Caltech/Jet Propulsion Laboratory (JPL) heritage embodied in its leadership team which helped the company to develop a notable AI technology at the research center.
The company enhances software systems developed for NASA/JPL, giving them additional capabilities and hardening them to industrial strength. Beyond Limits’ mission is to apply its advanced AI technology to solve commercial applications on Earth. The company is an AI leader with breakthrough cognitive technology that goes beyond conventional AI, blending deep learning and machine learning tools together with symbolic AIs that emulate human intuition. This is what known as cognitive intelligence.
Beyond Limits’ cognitive agents are trained and deployed to solve complex industrial and enterprise problems, bringing cognitive advantages to help energy, fintech, healthcare and logistics companies stay competitive or transform their businesses for the future.
Beyond Limits is leveraging technology that was developed for the space program to explore the solar system and beyond. The company created its AI technology to handle the unknown and harsh environments. Beyond Limits believes when we’re in space, we’re dealing with a dynamic system. We never know if we’re going to have the right data or misleading data. But the mission cannot stop. Beyond Limits is taking the same approach and strategy to solving complex problems here on Earth.
Moreover, Beyond Limits is the only company in the world with its AI systems proven in extreme environments from the North Sea, the Arctic Circle, the Gulf of Mexico, or in the middle of the desert to 150 million miles into space. All of these requires a successful mission and failure is not an option. 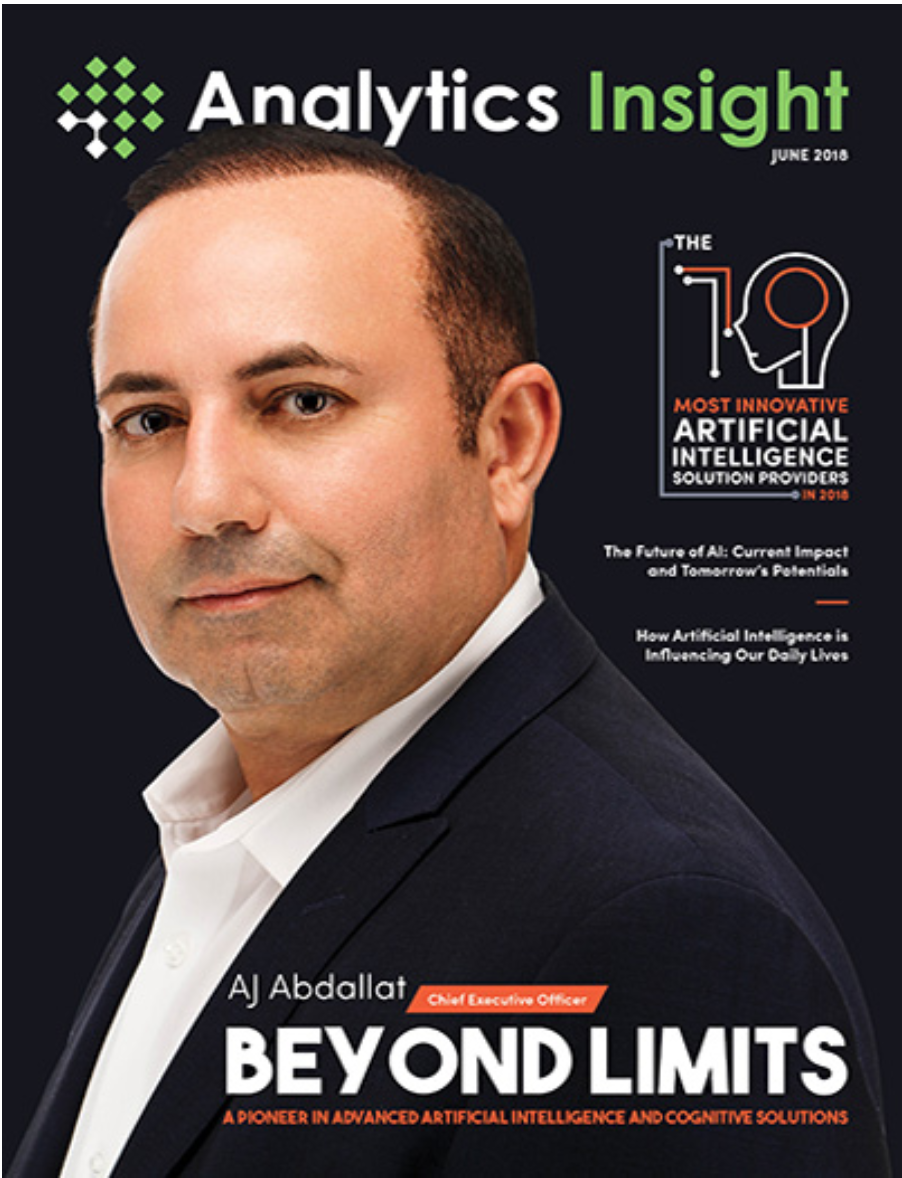 Meet the Visionary Leader and Innovator

AJ Abdallat is the CEO and Co-founder of Beyond Limits. Mr. Abdallat is a serial entrepreneur with more than 20 years of experience in building high-tech startups in the fields of artificial intelligence, cognitive reasoning systems, and smart sensors. He founded Beyond Limits in 2014 to drive new innovation as the company brings AI technology from the space program to solve challenging problems for enterprises on Earth.
Prior to establishing the company, Abdallat served at Hewlett-Packard and Control Data Corporation in High-Performance Computing and Technology Development functions to capture and implement large contracts in the government, aerospace and defense, and manufacturing sectors.
He secured Series A investment in 2014 and closed Series B funding from British Petroleum (BP) in early 2017. Abdallat is currently working on securing Series C investment to accelerate delivery of industrial-scale cognitive AI.
Abdallat’s entrepreneurial journey began when in 1998 he started working with Caltech which manages the Jet Propulsion Laboratory for NASA. “We wanted to commercialize technologies that were developed for the space program like smart sensors, thermal images, gas sensing and software innovations. One was a very sophisticated sensor to detect moisture on Mars. We created a company to apply the technology to the energy industry because moisture is a big contaminant for natural gas pipelines. My relationship with Caltech/JPL led to the emergence of Beyond Limits. The focus now is on human-like reasoning and cognitive intelligence offered by Beyond Limits”, he said.

Beyond Limits was created to bring advanced technology to solve complex problems for large-scale industries that matter. Industries that touch millions of people. The company attributes this foundation to its origin in the space program. Also, Beyond Limits tends to specialize in solving complicated problems in high-risk environments where the mission can’t fail.
Beyond Limits is directly contributing to the AI industry by applying foundational technical innovations created at Caltech/JPL for the NASA space program. The company’s CTO created many AI systems used at JPL, and one system helped the Voyager 2 Spacecraft avoid a key failure as it approached Neptune. Much of the IP innovation that brought to the commercial market was originally funded by taxpayers for NASA. Caltech is a founding shareholder of Beyond Limits and participates in its success. So, as the company rolls out advanced cognitive AI systems to help transform major industries, it’s a win-win for the nation.

Artificial intelligence enables companies to handle enormous amounts of data and perform diagnostic and prognostic analysis to predict what’s going to happen and what should happen. Unlike the conventional machine learning, neural networks and deep learning techniques that are gaining traction today, Beyond Limits takes a completely different approach. The company uses all those techniques but adds cognitive reasoning. Much of the cognitive intelligence capability and technologies created at Beyond Limits has deep roots in bio-inspired algorithms that imitate functions of the human brain. This allows the company to do deductive, inductive and abductive reasoning, and the exceptional ability to do human-like reasoning.
Moreover, Beyond Limits’ systems understand situational awareness or context. For example, one can show a machine learning system a thousand pictures of chairs, and it can become pretty good at identifying a chair. But it will never know what a chair is for, or why a human wants to sit down, or what makes a good chair compared to a bad chair.The company’s AI systems utilize human knowledge to learn context and meaning so they can make good recommendations to people for faster, better, decision-making and reduce risk.
“One more thing. Conventional AI systems are what we refer to as black box implementations, where systems are trained based on data, but cannot explain how they got the answer. That bothers me. At Beyond Limits, we’re taking a different approach where we can explain how we got the answer. Our systems provide an audit trail that explains the rationale and evidence for the answer. I think establishing trust is important. In industries where the stakes are high like medicine, energy, finance, people need accurate information. We need to have doctors, engineers, and other professionals understand how they got an answer. So, we provide them with that clear, evidence-based audit trail”, Abdallat said.

Beyond Limits has recently been named as a finalist for the prestigious Stevie Awards from the American Business Association. Beyond Limits also won a Tech Trailblazer Award in early 2018. But one of the biggest highlights for the company is that it has proved that its cognitive approach works for a very tough commercial audience. In one of the accounts, Beyond Limits came as the number fourth company on their list of AI providers.“But where the others hadn’t panned out, we won the business and proved that our methods work. What we said we could do, we did. Then the greatest compliment is when our customer became our investor” mentions Abdallat.

Beyond Limits believes growth is always challenging and the competition for AI talent is tough. The company is hiring talented AI engineers and data scientists and is fortunate to have excellent relations with world-class research universities. The company’s technical leadership team is composed of former scientists from NASA’s Jet Propulsion Labs at Caltech.

AI is one of the most positive advances in computer science the world has seen. It is poised to have a transformative effect on consumer, enterprise, industrial and government markets around the world. While there are certainly obstacles to overcome, consumers believe that AI has the potential to assist in medical breakthroughs, improving health and safety, democratize costly services, elevate poor customer service and even free up an overburdened workforce.
Abdallat believes virtually every industry is incorporating AI to solve complex problems. If they’re not, they should. “We’re not big fans of the clichés and misconceptions about conventional AI. One of the main ones is some people feel that machines are taking our jobs. In reality, we are automating a lot of repetitive or dangerous tasks. In 2017, Gartner predicted that by 2020 AI will automate about 1.8 million jobs. But there is also a forecast that by 2020 AI is going to create 2.3 million jobs. So, the net gain is going to be about 500,000 jobs”.
Beyond Limit is creating a collaboration between man and machine, to help magnify as well as amplify the human talent. This is going to end up creating more opportunities and more jobs for humans.

The company’s future roadmap is based on two pillars. One is growth. Beyond Limit plans to expand its global footprint in the coming time. The company is going to open more offices in North America, Europe, Asia, and the Gulf. Beyond Limit is also collaborating with several research universities around the world. So, expanding the global footprint is going to be a key for the company.
The other one is innovation. “That’s really our DNA. And the trend you’re going to see in 2018 is pushing intelligence at the edge. You’re going to see Beyond Limits introducing the first cognitive/symbolic AI chip. We’re excited about that. We’re going to complement existing machine learning and deep learning capabilities that some companies are introducing in 2018 with our cognitive AI chip. We’re looking forward to that”, said Abdallat.

Previous
CEO of Beyond Limits, AJ Abdallat talks to World Business with Kathy Ireland about the Future of AI
Next
AI for the enterprise transmitted directly from Mars
Read More
AI MAGAZINE: BEYOND LIMITS – Minimising Financial Risk with Cognitive AI
June 28, 2022
Read More
BEYOND LIMITS AWARDED ON PLANT ENGINEERING’S 2021 PRODUCT OF THE YEAR LIST
June 9, 2022
Read More
FORBES: 16 Changes Coming To The Web That Businesses Need To Prepare For
May 31, 2022
Read More
ENTERPRISE AI: THE FUTURE OF INDUSTRIAL-GRADE AI
May 24, 2022
Manage Cookie Consent